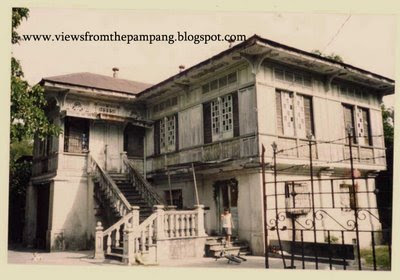 GRAND DESIGN. The Morales Ancestral Mansion, built by the Atty. Rafael Morales of Mabalacat, for his bride, Belen Lansangan of Sta. Ana in 1924, utilized the artistry of Betis craftsmen and master carpenters.

Along Vicente de la Cruz St., (formerly, Sampaguita St.) parallel to the busy Sta. Ines exit of the North Expressway, lies an imposing mansion that dominates the quiet, provincial air of this narrow barrio road. This is the 2 –storey Morales ancestral house, an 84 year-old stone and wood structure with an architectural style that harkens back to the days of bahay na bato, yet infused with geometric, floral and art deco elements considered “moderne” in those times.

The fleur-de-lis accented wrought iron grilles fencing the house bear the initials of the owner, Don Rafael Morales y Guzman, the youngest son of the town’s principalia, Don Quentin Morales and Dña Paula Guzman. Actually, it was Don Quentin who built the house, commissioning Betis carpenters and carvers under the supervision of Felix Guiao, who himself, was a self-taught woodworker. Upon finishing his advanced law studies at Georgetown University, Don Rafael married Belen Lansangan of Sta. Ana, and settled in this house fit for a king on a sprawling 2,000 square meter property.

From the outside, the pastel green and white Morales house has a linear, simple grandeur—from its straight, solid façade to the tin cutwork that lines the roof’s edge. The geometric feel is broken only by sparse classic elements like the pierced vents in the eaves done in floral patterns. The high windows are notable for their rare frosted white and cobalt blue glass panes, which were fully closed with persianas or louvres when sunlight becomes too harsh. During Mabalacat’s sizzling summers, the ventanillas underneath are slid open to let in more air.

The floor plan follows an inverted F-shape, long and linear, but full of open space. A concrete stairway lads you to the upper floor where the Moraleses took residence. The date of the house’s construction—1924—is part of the wooden cutwork above the double doors fitted with amethyst-colored glass knobs. The Morales fortune was built on agricultural lands and this important aspect of the family history is immortalized in the ornate arch in the ante-sala. The arch carries exquisite carvings of farming icons—a plow, bundles of rice stalks, harrow—arranged almost like parts of a family crest. To the right are the living room quarters including the high-ceiling bedrooms, topped with transomes or air vents to circulate air from room to room.

The expansive dining room features an old-fashioned banggera, where table ware and glasses are left to air-dry. This area of the house figured prominently in the 1972 shooting of the Vilma Santos-Dante Rivero-Charito Solis war-themed movie, “Mga Tigre ng Sierra Cruz”. A utility wing is conjoined with the dining area. A small veranda and the white-tiled bathroom are found here, complete with claw foot porcelain tubs and modern plumbing. Space flows from one room to another leading you to the kitchen and semi-enclosed azotea with stairs that you down almost down the Sapang Balen bank.

In its prime, the Morales mansion was furnished with the latest furniture from the House of Puyat: 6-footer book shelves to hold Don Rafael’s legal tomes, tryptich tocador, plateras and a hat and cane stand. In the ante-sala, the portraits of the family forebears, Apung Palu and Apung Quintin, cast their steady gaze on arriving visitors. A life-size wedding picture of Don Rafael and Dña Belen was the focal point of the living room. A large mirror with elaborate etched designs also was hung there.

The well-tended gardens were lush with rosals, palms, San Francisco, agave and other succulents. Kamias, mango and acacia trees provided fruits and shady canopies all year-round. As late as the 1970s, reunion parties, soirees and basketball games were held in the courtyard and the wide cemented grounds.

When the only two daughters of Don Rafael relocated in Manila, the house was left in the care of relatives and a succession of caretakers. The Castros, first cousins of the Moraleses, resided in the house at various times in the 1950ws, 1970s throught the 1980s.

Sadly today, the Morales mansion is in a state of disrepair, further aggravated by the Pinatubo eruption, the ravages of time and the occasional neighborhood thievery. Whatever was left of the heirloom pieces, the heirs have spirited away to Manila. Even the carved arches have also been dismantled for keeping as architectural relics.

The subdued opulence of the Morales ancestral house and its attendant history may now be a thing of the past, but for the many who still live in this quiet Sta. Ines neighborhood and walk its narrow street, it still exists, albeit dimly, a landmark symbol of wealth and refinement from a genteel era now long gone.


POSTSCRIPT: In late October 2008, the heirs allowed a number of missionaries from a religious order to use the old mansion as their residential headquarters. The house, heavily vandalized by former squatter tenants, is now undergoing restoration--to make it more liveable.

(*NOTE: Feature titles with asterisks represent other writings of the author that appeared in other publications and are not included in the original book, "Views from the Pampang & Other Scenes")
Posted by Alex D.R. Castro at 2:57 PM

i showed my grandparents this blog and they proudly told me that they met at this house. :D that's soo cool!

Wow, I might even know your parents. Where they from Mabalacat town?

I work for the daughter of Don Rafael Morales... Ms Luz Morales is already 82 years old... and she decided to let the missionary priests live in that house because she wants masses held there everyday... she also gave money for its repair...

Last time I met Mang Sitang was ehn she dropped by my place to see my mom. Tatang Pepe was at my mom's wake. Yes, I go visit the brothers in their old house when I go home for week-end visits. Fr. Elmer Emoinado, the director, however, was reassigned in Marikina. Indeed, the house is full of memories for me.

Teachers of Mabalacat College are trying to come up with a book about the history of Mabalacat in time for the municipalities __th anniversary... i hope we can interview you for that...

I have already published a book on the history of Mabalacat in 2006 entitled "Scenes from a Bordertown & Other Views". I spent 4 years doing research and compiling pictures. The cover design is under my profile. I actually gave each school in Mabalacat copies of the book.

Mabalacat College was established in 2007, so i doubt if they have a copy. Where can i purchase your book? Is it available at the National Bookstore? That would be a great reference material for what we are going to do...

By the way, i read your other posts about Don Rafael Morales... and i will show this to Ms Luz Morales, for sure this will put a wide smile on her face...

There are still copies of the twin book at Holy Angel University. But thed book is already out-of-print. Here's a site to the book launch:

I told Ms Morales about your blog and twin books... and she remembers you and your parents... i hope more copies will be printed... the twin books is like the perfect Christmas gift for the Morales sisters...

They have copies of my book. Mang Noning even corrected some data with regards to the house and added some details which are included in my write-up. She also told me that a painting of the house exists, I believe it hangs in their home. My paternal grandmother, Patricia Morales and Atty. Rafael Morales (Mang Sitang and Mang Noning's father) were the youngest in the family so they sort of watched out for each other, even building their houses next to each other.

If Ms Morales has a copy of your books, I think she has already forgotten about it... since she did not mention it yesterday... a painting of the old house hangs in her home today, and another one in the San Rafael office at Sto. Cristo...

I hope we can interview you when we go about with the book we are planning to create... by the way, my name is Teresa D. David...

I am based in Makati but am usually in Pampanga on weekends. You should really check out what my book has already covered. There are many primary sources about Mabalacat that are waiting to be unearthed from the NHI. Another U.S.-based Mabalacaquena (Mrs. Inez David)publihsed her memoirs that touched a lot on Mabalacat's social history.

I will be going to Holy Angel after Christmas to check out your book and research other stuff about Mabalacat... but i will also ask Ms Morales about the copy that you gave her... it might just be in her den or somewhere in the house...

Thanks for the info... i will try to contact Mrs Inez Dizon...