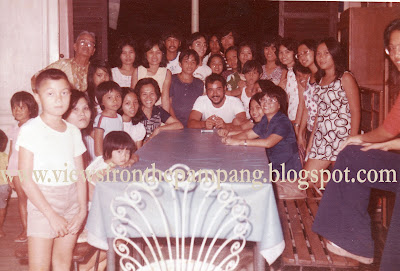 DANTE RIVERO AND A FAMILY OF FANS. So here's the whole starstruck clan with a souvenir photo of the Kapampangan male lead of "Mga Tigre ng Sierra Cruz", shot in my granduncle's house in 1974. My gushing mom sits to the left of Rivero, while my sis Susan is the little girl peeking over his head. I am next to Susan, with glasses. Mike, my younger brother, in white shirt and khaki pants, stands to the left. Some cousins and aunts travelled all the way from Manila to meet and greet the stars--including Vilma Santos.

We live right next to my granduncle’s 1924 mansion, an old, rambling two-storey house with a period look and a photogenic façade, located in Sta. Ines. It was no wonder then that a film outfit, Lea Productions, decided to rent the uninhabited Morales mansion for two days, to serve as a shooting location for the wartime movie, “Mga Tigre ng Sierra Cruz”, in the summer of 1974. This was no ordinary movie as it starred no less than the star for all seasons, Vilma Santos, still a teener at that time, whose Kapampangan roots were in nearby Bamban, Tarlac.

Of course, our whole family was consumed with excitement—and so was the whole Mabalacat town, as word got around that indeed, Ate Vi, was coming to town! Our family was mobilized by the producers to assist in ensuring a smooth, trouble-free shoot on the day of the filming which was to take place late at night. My father was even assigned to fetch Vilma Santos from her lodge in Dau and taken to the shooting venue through our house. But the moment the shooting lights went on, scores of town people appeared from nowhere to gawk at the cinematic goings-on.

Still, being relatives and the unofficial caretaker of the house, we—and a platoon of relatives who came all the way from Manila to stargaze-- had the front seats to the shooting. Director Augusto “Totoy” Buenaventura was in command the whole time, calling take after take. One Mabalacat girl was even lucky enough to be cast as an extra in one critical scene, earning the role of a housemaid. In that dining room scene, Japanese soldiers were supposed to be having a rowdy dinner. Enter, the Pinay househelp with more dishes of food. When the soldiers get fresh on her, she drops the plate-- a signal for the guerrilla fighters to attack the enemy. Some were even directed to spring from the banggerahan for the surprise raid. I felt that scene was simply awesome!

The best part of the shoot was meeting the stars of the movie in person. I became an instant Ate Vi fan when she obliged the townpeople gathered outside the gate with a personal appearance, waving her hands to the crowd below from the balcony. The whole town just went mad. Later, with my portable cassette recorder, I even managed to interview Ate Vi, asking how she could possibly retain her composure despite her stardom. I asked a lot of showbiz questions that would put Ricky Lo to shame. I kept playing our recorded conversations for months after that, until I lost the cassette tape.

Co-starring with Vilma in the movie was another Kapampangan, Dante Rivero (aka, Luisito Mayer Jr., from Floridablanca). Unlike Ate Vi who was always game, Dante was not too accommodating, brushing my request for interview with a terse “Can I talk later?”. But he took a shine to my cousin Beng, who later asked her for a date. I was also luckless with supporting actor Ruel Vernal, who intimidated me with his height. Charito Solis, a co-starrer, was unfortunately not part of any scenes that were for shooting here.

The next shooting day mostly had action scenes and vivid on my mind was the sight of Japanese soldiers rolling down the front stairs of the house, shot at by the fighting ‘tigres’ led by Rivero. I also remember staying up so late to watch the whole proceedings, retiring only after the shooting has packed up.

When it was all over, the house and its garden were a mess, with most of the flowering plants in the garden dead and trampled. Worse, when the movie was finally shown in local theaters after months of anticipation, the house was just seen on screen for a minute or so, I could barely recognize it. Even the part of the Filipina househelp played by a local Mabalacat girl was edited out, her 15 minutes of fame down the drain. I don’t think “Mga Tigre ng Sierra Cruz” made a killing in the box office, either.

Many shootings have been held at the grand Morales mansion since then—the most recent one was undertaken by U.P. film students in March 2009. But old folks who pass by the street still point to the old mansion and refer to it as “the house where they shot the movie ‘Mga Tigre ng Sierra Cruz’ starring Vilma Santos and Dante Rivero”. The magic of that cinematic moment of over 30 years ago still is remembered, enriching the history of the house. Now that’s entertainment!
Posted by Alex D.R. Castro at 4:42 PM