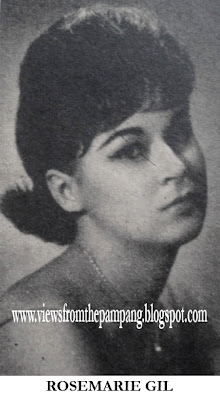 ROSEMARIE'S BABIES. The Gils, a family of actors led by mother Rosemarie and children Michael, Mark and Cherie Gil, hail from Barrio Pio, Porac. Their Spanish bloodline is courtesy of Don Felino Gil, founder of the first trade school of Asia and a Spanish military man who became a hacendero in Porac. ca. 1963.

Two generations of Gils continue to liven Philippine cinema arts today and credit should be given to the one who started it all—Rosemarie Gil—who traces her Hispanic-Kapampangan roots from Porac. Though Manila-born (b. 9 March 1942), Rosemarie’s family comes from Barrio Pio. She is directly descended from Don Felino Gil (1804-83), a Spanish military man who was assigned to Porac to prepare the area for the coming friar missions as well as to secure the forests which were a chief source of lumber for the projects of the Spanish government. Gil impressed his Spanish superiors and was rewarded with large tracts of lands which he converted into a profitable sugar hacienda.

Rosemarie Gil, like her daughter Cherie, was known for her rich socialite-villain roles, but surprisingly, she was introduced in a religious movie in 1958, in the title role of “Santa Rita de Casia (Patrona ng Imposible)”, opposite Lauro Delgado, who portrayed the saint’s wayward husband. This movie turned out to be a hit, but in the 60s, she married Eddie Mesa (Eddie Eigenmann, in real life), putting her stardom on hold, while her husband, known as the Philippines’ Elvis Presley, enjoyed a flourishing career as a singer and actor. The couple would eventually settle in the U.S., separate and then reconcile

Rosemarie went back to make movies for international release in the 1970s, starting with “Manda” (1970), “Night of the Cobra Woman” (1972), “Master Samurai” (1974), and the remake of “Siete Infantes de Lara” (1973). It was in 1977 that she made her presence felt in the 1977 critically-acclaimed “Burlesk Queen”, starring Vilma Santos. For her role as Virgie Nite, Rosemarie earned a Gawad Urian nomination the following year.

Meanwhile, her children were also making their own mark as actors of note in dramatic movies. Cherie Gil (b. 12 May 1965) is undoubtedly one of the best contravidas of Philippine movies, best known for making life miserable for megastar Sharon Cuneta in the movie, “Bituing Walang Ningning” (1985). As the villainess Lavinia Arguelles, she spewed out the often-quoted put-down line, “You are nothing but a second-rate, trying hard copycat!”, while dousing Sharon with a glass of water. Siblings Mark Gil (b. 25 Aug. 1961) and Michael de Mesa (24 May 1960) are also seasoned actors on TV, stage and the silver screen. The next-generation Gils, led by heartthrob Geoff Eigenmann, continue to thrill Filipino fans on TV and Film.

The Gils have since upped and left Porac—only the controversial Pio Chapel—part of the Gil hacienda constructed in 1861, remains of their once vast homestead. This property has since been sold. The Gils may have already uprooted themselves from Pampanga, but in movies, stage and films, they continue to shine and make their presence felt, in the same league as the Dela Rosas and Fernandezes—actors, thespians, singers, dramatists, zarzuela stars, Kapampangan performers all--who once ruled the golden age of Philippine cinema.
Posted by Alex D.R. Castro at 4:30 AM

My mom thought that Rosemarie Gil hailed from Iloilo... But then, as she was saying earlier the previous day, she discovered she was also a Kapampangan. :)

The Gils would pop in and out of Porac, till the 80s, when they sold the property to someone from Bulacan.

The Gils were from Porac and Floridablanca. Gil-Toledo, Toledo-Gil, Herreros-Gil, Gil-Herreros-Toledo-Toda; They intermarried each other to maintain their wealth and properties(Hacienda Toledo, Hacienda Herreros, Hacienda Gil).

My relatives from my motherside is related to the Gils and Toledos. My mothers name is Natividad Toledo Coronel, her mother is Asuncion Toledo, her grandfather is Manuel Toledo, who is the son of Luisa Gil Toledo, whose father is Don Felino Gil. We still have properties from Porac, whose titles bear the name Luisa Gil de Toledo.

@toledocoronel: is it possible that you still have a photo or a portait of Don Felino Gil?

The Toledo clan is alive and well. My maternal grandmother is Maria Carmen Toledo who is one of the 5 children of Manuel Toledo. My great aunt, Maria Pilar Toledo used to relay stories about the Gils, and the Todas. The last of the Manuel Toledo children (youngest and only male, Alberto Toledo lived, and died in Porac in the 90's.

The Gil and Toledo are land grabbers! They took the land from Herreros.

The Gils and Toledos are not land grabbers. The truth is that they are the victim of land grabbing. Toledos and Gils had their haciendas and so did the Herreros but unfortunately they sold it to the Mendiolas and since then the Herreros became impoverished.

I'm and old lawyer who live in Angeles City, I've witnessed the hearing numerous times, I've learned all the legal issues between the Gozun family and Don Roberto Gil Toledo 111, Gozun family currently owned and claimed as the owner of the Hacienda Bellas Vistas situated in Barrio San Jose Floridablanca and Basa Air Base Pampanga,till the last breath of the late Don Roberto Gil Toledo 111, he was weeping, collapsed during the hearing when he found out that the Toledo State was stolen from him by the Gozun family from San Fernando Pampanga,the old man was sent to jail being accused of a trying to get the Gozun family killed, the old man can't get up on his own, by the way those Gozun family works in the Register of Deeds and Land Tittle, no problem transferring the Toledo state to their Gozun family name. It's true that Rosemarie Gil and family only comes and goes in Barrio Pio Porac Pampanga, the late Don Roberto Gil Toledo 111 inherited the property in Pio which shows in the old testament that he carried around while alive. Miracle how it became Rosemarie Gil's property?

The old man can't read English, guess ignorance was an issue. GOZUN family are the Hoodlums.

Hacienda Bellas is located in Floridablanca Pampanga, most in San Jose and Basa Air Base, the only soul, proprietor Heredero is Don Roberto Gil Toledo 111 who resided in San Jose Floridablanca. The one and only child of the late Don Roberto Toledo 11. San Jose Elementary School was donated by his father. While Don Roberto Toledo 11 wife is gravely ill he impregnated their muchacha (tsimay) nickname Paniang who's from San Nicolas, out of wed luck, she borne a crippled handicapped daughter named Maria Nieves, married to the greedy, dishonest, infidel (sakim) Joquin Gozun Jr, with all their power, the Gozun family did able to out smart the late Don Roberto Gil Toledo 111, by making Don Roberto Gil Toledo 111, to sign the papers that he did not understand, Deed of Sale, or (Benta Absoluta) only he can read Spanish, Gozun family forged his signature stating that he sold the hacienda to Maria Nieves and Jouquin Gozun, now the hacienda is not Toledo any more it's Gozun. According to the news, Gozun family are cursed, bunch of dysfunctional family, deuce bags and scams, they tried selling the hacienda to the people who lived there before even the church was built, for over price. People have to find their way to move out of the barrio for the little earnings they have.

Hola! The Herreros family are not even heard in Pampanga! What kind of land are you talking about?

Louie Aldrin Lacson Bartolo said...
This comment has been removed by the author.
October 1, 2017 at 2:14 AM

Amigos, if you want to know about Gils, please follow this link. https://www.facebook.com/notes/louie-aldrin-lacson-bartolo/aquinos-and-gils-how-they-are-related/1904378359580190/
maybe it will help this new information...Gracias!

@Anonymous who posted a comment on March 25, 2015. The Herreros Family is one of the wealthiest landlord families in Pampanga. Just like what happened to many hacendero families, they did not manage their wealth well and they ended up being poor.

Obviously you dont know what youre talking about and youre not from pampanga. The Gils and Toledos were the original owners of the haciendas.

Herreros family are unheard of here in pampanga today.the gil and toledo families were the original owners of the haciendas.

I'm researching my family history to build my family tree [descended from Roberto Toledo III, father of Dolores Toledo, and specifically his granddaughter, Eloisa Herreros (born 1875)] and this information helps. I realize this post is a decade old, but if it so happens you come back to check on it -- where and how did you retrieve so much of this information?

Just as a side comment to some of the other posts on here: most Herreros descendants (100+) have by now immigrated to California and Australia. I've heard tales of these landownership issues but being a millenial, I know very little. My maternal grandfather, Richard Herreros, son of Eloisa Herreros and William Wolfert, apparently left the Philippines for California after being ostracized from the family for marrying my filipino grandmother rather than marrying within the Spanish landownership class.

Thanks for these informational blog posts!

Waiting for her upcoming Teleserye Legal Wives, where Cherie Gil will perform as Zaina Guimba.

Pinoy Tv is a great platform that refers to Filipinos and their culture within the Philippines and overseas Filipinos among Filipino Diasporas. teleserye feature programs from Pinoy Series In HD Quality. Pinoy TV is the Best Website Ever. These shows are also available online on the Pinoy Flix website. Pinoy Tv shows are updated daily on the online website, so if Filipinos can't watch live TV shows, they're not going to miss the most recent episode of their favourite show nationally and internationally. Please reload the page if any error appears and also bookmark our website to enjoy the latest updates Pinoy Tambayan online.

I just like the valuable info PinoyFlix you provide to your articles. I will bookmark your weblog Lambingan and to check Pinoy Tv once more here regularly. I’m slightly sure I will be informed a lot of new stuff about Teleserye,
Lambingan TV, and
Pinoy Lambingan right right here! Good luck for the following!

kissasian always be the first to have the All episode so please Watch Right Now https://kissasiansh.info/