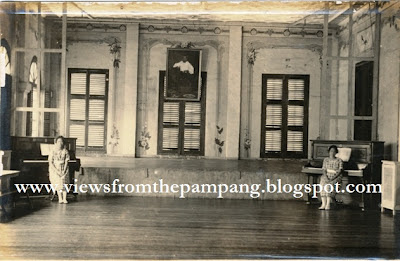 GOOD TO BE HOME. The stately interior of an unidentified Sta. Rita house boasts of burnished woodplank floors, painted walls, large windows and furnishings including two grand pianos and a painted portrait of the family matriarch. Ca. 1920s.

Sta. Rita is one of Pampanga’s smaller towns, but it is big on charms and local attractions. The more apparent points of interest when one walks its streets are the many heritage houses, mostly well-preserved and still intact, right down to their interior furnishings and architectural details. After all, this ancient town, which became independent from Porac in 1770, was spared from the damages inflicted by the last World War, as well as by the 1991 Pinatubo eruption that caused much loss to the material heritage of its neighbor, Bacolor.

As a result, the town has retained much of its colonial structures, ranging from the modest to the magnificent, certainly contributing much appeal to Sta. Rita’s landscape. Noticeable still are a number of native houses constructed in the style of bahay kubos, constructed with nipa roofings, pitched high over a wood structure, elevated by a framework of posts.

The Malig-Lansang House is one such residence that began as a bahay kubo, as seen from its very high pitched roof, thatched with layers of dried nipa. Ceiling-less like a kubo, the house shows transitional features as it was being transformed into a bahay na bato: from its covered zaguan to its rich wall panellings of Philippine hardwood.

Similarly, there are many bahay na bato examples here complete with features like zaguans (ground floor housing processional carriages or storing grains), entresuelo (a sort of a waiting room), caidas (receiving area, from the Spanish word, “caer”—to fall, as this is the part where women let fall of their saya trains), comedors, cucinas and oratorios (prayer rooms).

The Carpio House, with a commanding view of the Santa Rita Church, is a two-storey structure that is noted for its expansive receiving rooms. An exterior cement and tile staircase, added later, takes one to the upper floor which boasts of opulent interiors, with wooden wall panels, oversized windows and floors hewn from redwood planks.

The nearby Maglalang House, built on a spacious lot dotted with greens and trees, reeks of rusticity, what with its wooden capiz windows and wooden banggerahan. Once inside, there are traces of its luxurious past—a pair of Venetian glasses on the wall, a grand piano, an altar-full of ivory santos and sacred art, even a wooden refrigerator from the turn of the 20th century!

Then there’s the house of grand dame Irinea Pineda, whose brother, P. Braulio Pineda was a prominent religious figure of Sta. Rita. Half of the house has been converted into a school, but the residence has been wonderfully preserved by her descendants—from the sliding capiz windows, calado transoms (woodfret cut-outs panels that allow air to circulate from room to room) and intricate iron grills.

There are also notable houses belonging to two great clans of Pampanga, who are in fact, relatives. The De Mirandas keeps a beautifully-maintained heritage house that is characterized by its capiz windows, hardwood floors and polished wooden walls displaying heirloom art. Although now modernized with air conditioning, the De Miranda house reflects the relative affluence of the town with an economy built largely by farming. A distinguished member of the De Miranda family is Don Angel Pantaleon de Miranda, who, together with his wife, Rosalia de Jesus went on to found the town of Culiat, now Angeles City.

Equally-impressive is the stately house of the De Castros, relatives of the De Mirandas. Upon entering, one is drawn to the art nouveau arch that graces the portal of the house. One ascends a richly-burnished wooden staircase to reach the commodious top floor which houses the sala or living room. The wide double windows of capiz and persiana affords one to see the different vistas of the town. Grilled ventanillas circulate air freely around the house. The walls are handsomely painted with art nouveau floral motifs and on the house posts are mounted old shadow boxes with hand-made assemblages inside showing allegorical wooden figures of the four seasons labeled as Verano (Summer) Primavera (Spring), Otoño (Autumn), Invierno (Winter). The De Castro home used to be a favorite venue for film productions, but the loss of some heirloom items in a shoot starring Aga Muhlach prompted the current caretaker to stop this practice.

Indeed, for most Sta. Ritenos--whether his house is a tiny kubo or a European-style mansion-- there's no place like home. It is good to know that there is a growing consciousness for heritage conservation among the residents, with many original owners opting to preserve their homes than sell them, which speaks well of the locals' pride of place. As one philosopher wrote: "the strength of a nation derives from the integrity of a home"--and when one walks around Sta. Rita to marvel at their well-preserved heritage homes, you can't help but agree.