*309. Star for All Seasons: VILMA SANTOS of Bamban, Tarlac 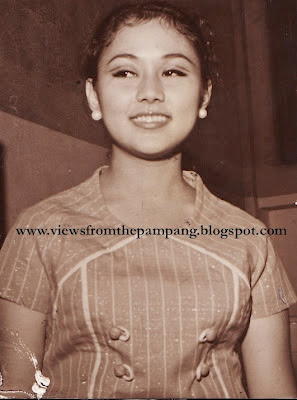 My first brush with a superstar was in 1974, when I came face to face with THE Vilma Santos, who, alongside Nora Aunor, was one of the most popular teen actors of Philippine cinema. That time, she was at the top of her game both as a solo actress and the other half of the Vi and Bobot love team , a sure box-office draw of TV, Movie, Radio and even Advertising.

She had come to Mabalacat to film the war movie, “Mga Tigre ng Sierra Cruz”and several key scenes were to be filmed in my granduncle’s old house in Sta. Ines, conveniently right next to ours. That meant instant access to the production, as we were the designated caretakers of the Morales mansion. The enviable task of fetching Vilma from an undisclosed hotel to be brought to the house was assigned to my father. To get to the shooting venue without attracting the attention of the motley crowd to get a glimpse of the stars, Vilma was whisked off to our own house which had a connecting passage to my relatives’place.

For the next three days, I fell under the spell of Ate Vi—easily transforming me from a Noranian to Vilmanian. More so when, during a lull moment in the shoot, I had the gumption to talk to her (her co-star Dante Rivero refused to be interviewed!), and I even managed to put on tape our short conversation which began with her greeting ”To all the people of Mabalacat, I love you all!!”. Who wouldn’t be charmed by her sweetness? (Though I bet that was a standard line she said to ALL the people in ALL the towns she visited).

Rosa Vilma Tuazon Santos was the second to the eldest child of Amado Santos and Milagros Tuazon, born in Trozo, Tondo on 3 November 1953. The Santoses were a close-knit family from Bamban, Tarlac and Amado’s father was a well-known town physician. Vilma’s father moonlit as a bit player in movies, while an uncle, Amaury Agra, worked as a camera man at Sampaguita Pictures. It was he who tipped off the Santoses about an audition for a child to play the lead in a planned movie, entitled ”Anak, Ang Iyong Ina” in 1963.

The Santoses entered their precocious daughter in the casting call. However, Vilma mistakenly joined a line of children who were auditioning for the movie “Trudis Liit”. She found herself winning the plum role of the Trudis, the maltreated child who cried her way into the hearts of movie fans and box office stardom. Vilma was only 10. That same year, she won her first FAMAS as Best Child Actress of 1963.

As a child superstar, she made more than 27 movies spanning the years 1963-69. Together with Roderick Paulate, Vilma even made a Hollywood war movie—“The Longest Hundred Miles”—which starred Doug Maclure, Ricardo Montalban and Acacdemy Award winner, Katharine Ross. But more was in store for Vilma when she reached her teen-age years.

It was the 70s decade when young love teams were all the rage and light romantic musicals were sure blockbusters at the tills. Pitted against the Nora Aunor-Tirso Cruz III tandem, she and former Tawag ng Tanghalan champion, Edgar Mortiz were launched as a love team. So popular was the Vi-Bot pairing that they made over 30 films in less than 5 years—an astounding number that includes ”Young Love”, “Songs and Lovers”, “My Pledge of Love”, “The Young Idols” (all released in 1970), “D’Sensations” (1971), “Don’t Ever say Goodbye” (1972), “Now and Forever” (1973) and “Biktima”(1974), to name just a few. On her own, Vi was just as sensational, assuming iconic roles as Darna and Dyesebel (1973) and jumping into the disco bandwagon with hits like ”Rock, Baby Rock”, “Good Mornings, Sunshine” and “Disco Fever”—all done in the 70s.

Her winning streak continued into the 80s, even as she celebrated a milestone in her life with her marriage to actor and model Edu Manzano in 1980. They would have a son, Luis, whom Vilma would greet weekly in her TV show, “V.I.P. (Vilma In Person)”with a what has become her byword:" Ï Love You, Lucky!”. In 1982, she won Best Actress honors from the FAMAS, Urian Awards, Film Academy of the Philippines (FAP) and the Catholic Mass Media Awards (CMMA) for the highly-acclaimed movie “Relasyon”, the first of her 3 grand slam wins. She would win more Best Actress accolades from major award-giving bodies for “Tagos ng Dugo”(1987) and “”Bakit Mahal Kita: The Dolzura Cortes Story”(1993). Her other memorable movies during this period include "Pakawalan Mo Ako" (1981), “Broken Marriage”(1983), “Sister Stella L.” (1984), “Alyas Baby Tsina”(1984), and “Pahiram ng Isang Umaga”(1989).

The start of the 90s decade saw Vilma reinventing herself by entering politics. By then, her marriage with Edu had failed but she found a new partner in Ralph Recto, grandson of statesman Claro M. Recto, whom he wed in 1992. A son, Christian, was born from that union. Under the Lakas-Kampi-CMD Party, she ran for the mayorship of Lipa and won. She would served the city for 9 long years. Vi, however, continued to make films, albeit sporadically. She was exceptional in “Bata, Bata, Paano Ka Ginawa”(1998) and simply sensational in “Anak” (2000), “Dekada”(2002) and ”In My Life”(2009). In between, she joined 2007 gubernatorial race for Batangas, which she topped convincingly. The incumbent governor moved to the Liberal Party in 2009.

From a child actress to a teen star and now, a well-loved politician, the accomplished Vilma Santos has endured—winning not just acting trophies but recognition for her work as a public servant. The winsome “Ate Vi” that I met 4 decades ago, continues to shine like a true star that she is—a star for all seasons, for all Kapampangans to be proud of.
Posted by Alex D.R. Castro at 5:34 PM