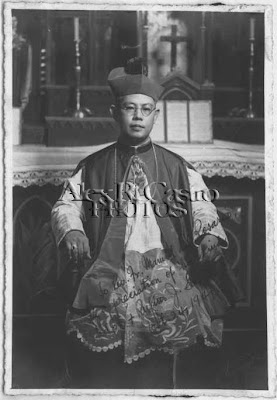 TO WIN MEN’S SOULS, TO PERSUADE TIMID HEARTS. The future cardinal , Msgr. Rufino J. Santos, aged 39 years old, as he appears in his official picture as Auxiliary Bishop of Manila and Titular Bishop of Barca . This signed picture was dedicated to his close friend, Rev. Fr. Manuel del Rosario of Angeles City, uncle of the columnist, who also accompanied him to Rome at his elevation to cardinal. Dated 24 October 1947.

By the end of this month, on 31 March, we shall be commemorating the 43rd anniversary of the elevation of the first Filipino to cardinalship, a rank second only to the Pope: His Eminence Rufino Cardinal Santos y Jiao . His ascension to the Catholic hierarchy was keenly followed by his kabalens, who saw his accomplishments as testaments to the depth of Kapampangan spirituality. For him though, there had been no shortcuts to achievement; much hard work and sacrifice had gone into the fulfillment of his vision for the Philippine church, from the time he struggled to fulfill his boyhood dream to be a priest to his installation as head of the premier archdiocese of Manila.

Rufino was born in barrio Sto. Niño, Guagua on 26 August 1908, the youngest male of 7 children of Gaudencio Santos and Rosalia Jiao. His siblings included Manuel, Emiliano, Quirino, Clara, Jovita and Exequiela. Gaudencio, who was working as an overseer for a farm near Arayat, moved his family to Intramuros, Manila after the death of his wife where he hoped to find better livelihood prospects. There, at the Manila Cathedral Parochial School, the 8-year old Rufino was enrolled in first Grade. He was one of the star students of the school, often rendering his services as altar boy or choir boy during the Holy Mass at the Cathedral. His formative years at the parochial school obviously instilled his early ambition to serve God.

Finishing 4th grade with honors, he was accepted at the San Carlos Seminary on 15 June 1921. His road to priesthood took a major turn when, in 1927, he was accepted as a scholar of the Pontifical Gregorian University in Rome. Just 19, he left for Italy together with another scholar, 24-year old Leopoldo A. Arcaira. He obtained his Baccalaureate in Canon Law after 2 years, and then further pursued his Doctorate in Sacred Theology for another 2 years. At age 23, he was one year short of the required age for ordination to priesthood, so a special dispensation had to be secured from the Pope. Finally, on 25 October 1931, Rufino Santos was ordained at the magnificent Basilica of St. John Lateran in Rome.

Following his return to the Philippines, Fr. Rufino Santos, or simply Fr. Pinong to those close to him, was named as assistant priest of Imus, Cavite and then parish priest of Marilao, Bulacan. Later, he was transferred to the see of Manila where he became Vice Chancellor (1932) , Superintendent of Instruction and Financial Secretary-Treasurer (1939) all at the same time.

The Philippine Catholic Church was not spared from the onslaught of World War II in 1942. On 4 February 1944, Fr. Santos was arrested and jailed at the Fort Santiago where he was beaten and tortured by Japanese soldiers; he was eventually moved to Bilibid where he was rescued by Americans a year later—on the eve of his execution. Barely had he recuperated when he was named by Archbishop Michael O’Doherty as Vicar General of Manila. Two years later, he was elected as the Titular Bishop of Barca and Auxiliary Bishop to the archbishop. Upon O’Doherty’s death, Archbishop Gabriel M. Reyes of Cebu assumed the archbishopric of Manila by papal appointment, the first Filipino to do so.

Fr. Santos took on the position of Military Vicar of the Philippines in 1951. Upon Archbishop Reyes’ death in 1953, Pope Pius XII named Fr. Rufino Santos as the new Archbishop of Manila. In his new role, he quietly worked towards building a local church sensitive to the needs of the masses, organizing welfare projects such as the Catholic Charities. He launched religious crusades (Purity Crusade for Mary Immaculate), built seminaries (Our Lady of Guadalupe) and restored Manila Cathedral to its old grandeur.

The highlight of his religious life was his elevation to the rank of the cardinal at the Basilica of St. Peter in Rome at 9:30 a.m. on 31 March 1960. In the company of his brother and sisters, and amongst kabalens like Vice President and Mrs. Diosdado Macapagal, Msgr. Rufino Santos was conferred the galero or Red Hat, the symbol of cardinalate, by Pope John XXIII in solemn but glorious ceremonies attended by an international crowd numbering in thousands. Finally, after 400 years of Christianity, the Philippines had a cardinal! It was a thrilling piece of news that was flashed around the globe, reverberating throughout the country and echoing louder in his native Pampanga. Cardinal Santos then issued his first message to a proud Filipino nation that included a prayer and a wish : “Honor and glory to the Lord…Blessed be the great Lady of the Philippines, the Immaculate Virgin…May God bless my Country!”

Cardinal Rufino J. Santos’ 20 years of ministry as pastor of the See of Manila will be remembered as the years of major reforms in the Church as adjured by the 2nd Vatican Council. Liturgical changes, attitudes on family planning, Filipinization of the clergy—all these transpired during his term, not to mention controversies like married priests, an issue that is very much now (Of this, the cardinal says: “A priest is not supposed to get married. When he made the vows, he knew what he was doing. Priesthood is a sacrament that eliminates another sacrament—marriage.”). It was also during his cardinalship that Pope Paul VI made his historic visit to the Philippines in 1970.

On 29 June 1973, Cardinal Santos suffered his first stroke while praying the rosary at Villa San Miguel; he would never recover from his condition. At age 65, the good Cardinal died peacefully at San Juan de Dios Hospital on 3 September 1973 and was interred 7 days later in a crypt at the Manila Cathedral. A whole nation mourned the passing of the first Filipino cardinal, a Kapampangan who made good his promise “to win men’s souls for Christ..” Indeed, Pampanga’s loss was heaven’s gain.
(29 March 2003)
Posted by Alex D.R. Castro at 3:34 PM

Sir,
Do you have any email of the relatives of the late Cardinal Santos? I heard from my relatives that he was related to my grandma who hails from Pampanga.

Thank you for any info. you can give me.

I don't have any at the moment, but you can google the site of the Cednter for Kapampangan Studies, there is a contact e-mail there that you can use to ask its director, Robby Tantingco, for the information. I know they organized the installation of the Cardinal's statue in Guagua which was attended by his surviving relatives. Thanks.

Hi Leah,
I just read your post, the late Cardinal was my grand uncle. Please get in touch... my email is ompetv@hotmail.com. It would be nice to trace our roots. Hope to hear from you.

My grandfather is emiliano santos the brother of the cardinal. It would be nice to find our roots of the santos.

Hi Jerry, Maybe you could try looking at the canonical books of the Cardinal's town (where he was baptized) to trace your ancestry. The baptismal entries would give you clues to your forebears. BTW, my late uncle, Msgr. Manuel del Rosario, was a devoted aide of Cardinal Santos. I have his picture albums that include a lot of fotos of your uncle. Thanks for visiting my blog!

hello I am a descendant of Cabesa de Barrangy Benigno Santos Scultor of Manila brother of late Cardinal Santos.

Hello Jerry, my grandfather is the eldest brother of Cardinal Santos. :)

Hello Jerry, my grandfather is the eldest brother of Cardinal Santos.:)

Can you help me to find why we are related to Cardinal Rufino Santos. How is my Greatgrandmother Catalina Santos of Sta Ana Pampanga related to Gaudencio Santos.