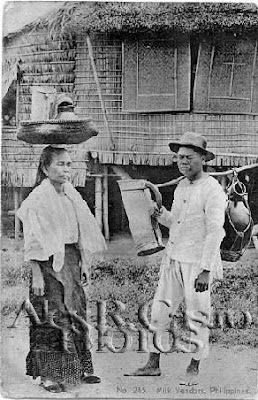 My most delicious childhood memories are made of gatas damulag---smooth, creamy, fresh-from-the-farm carabao’s milk that Mother used to buy from early morning market hawkers. These were not your regular vendors, mind you, but farmers’ wives, sons and daughters, out to make an extra peso or two from the dairy produce of their own carabaos. Gatas damulag often came in recycled ketchup bottles, but in the days of yore, as seen from this vintage postcard, the milk was peddled and stored in metal pitchers and earthenware crocks or dispensed from jugs made from dry gourds. These ambulant lecheros/lecheras would station themselves strategically near the public market while others would line the main highway, waving the familiar bottles to passing motorists to attract their attention. By mid-morning, their milk-selling duties would be over.

Gatas damulag has a richer, creamier flavor than your everyday cow’s milk. Early on, it was drilled into our young minds that carabao’s milk is more nutritious than cow’s milk; it’s got less water, more total solids, more lactose. And, with a fat content that’s 50-60% higher than cow’s milk, it was guaranteed to make you fatter, faster! Of course, like all milk, it had to be heated first to be enjoyed, lest one developed stomach pains (Or worse, cholera—just like what happened to the revolutionary hero, Apolinario Mabini, who died from complications caused by drinking contaminated milk!)

No wonder, gatas damulag manifested itself in many mouth-watering ways in our diet. For breakfast, we poured it onto a heaping mound of rice which we then sprinkled with sugar. Or we ate our milk-soaked rice with fried tuyo (salted fish) or mango. Duman (green glutinous rice) season also provided us with another rare milk-and-rice tummy filler. Spoonsful of this green-colored glutinous rice was put in a cup and allowed to swell while drenched in hot carabao’s milk, a real taste delight!

We seldom drank carabao’s milk straight from a glass but an irresistible treat that was often served when I got sick was my Mother’s homemade egg nog. Milk was heated in a pan, then transferred to a tall glass. While still steaming hot, a whole egg yolk was briskly stirred into the milk. Sweetened with sugar, a glassful was enough to send me rising from my sick bed. Still another jiffy merienda idea was to dunk banana slices into a cold glass of milk for a banana shake unlike any other!

Of course, our traditional sweets are often laced with gatas damulag. San Miguel de Mayumo may have laid claim to having originated the famous pastillas de leche (milk candies), but Pampanga’s pastillas, in all their sweet, soft, munchy deliciousness, can hold their own against Bulacan versions. In the early days, pastillas were made by farming families themselves, requiring the most basic of ingredients: milk, sugar and lemon rind. The concoction is allowed to simmer in a tacho, or copper pans, thickened to a desired consistency, cut up or molded, then rolled in sugar. The sweets are then wrapped in fringed papel de japon; in Bulacan, the wrapper is exquisitely cut to include local folk motifs, an art form in itself. Or, like jalea, the pastillas mixture can be bottled. These days, pastillas come in plain brown boxes, wrapped individually in plain tissue. Magalang’s Pabalan Delicacies are renown for their delectable pastillas and are sought after as pasalubongs by local tourists and viajeros.

Snack lovers insist that carabao milk pastillas is what gives the halo-halo served at Corazon’s in Angeles and Kabigting in Arayat truly a distinctive flavor. That may indeed be true; after all, another local dessert—leche flan—utilizes the same taste and texture of gatas damulag to the fullest. Mixed with egg yolks, sugar and dalayap (lime) and steamed in oval tin molds, the resultant flan is creamy and caramel-y to the lips, with a hint of vanilla and lemon.

Nowadays it seems, one has to go farther to look for gatas damulag. But when one does finds it, it still comes in the same clear ketchup bottles--no labels, no frills—just 100% milk, as pure and unadulterated as our world back then.
(3 May 2003)
Posted by Alex D.R. Castro at 3:38 PM