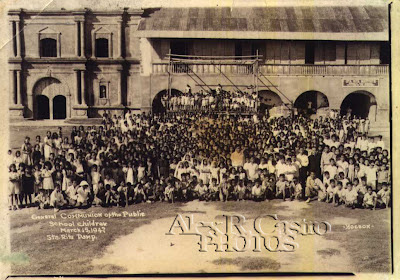 GENERAL COMMUNION OF THE PUBLIC SCHOOL CHILDREN. Sta. Rita Church, Sta. Rita, Pampanga. The Sta. Rita Institute General High School is housed in the next building. Fr. Felipe Diaz could be the parish priest shown in this picture with the first communicants, as this picture is dated 15 March 1947, still within his term.

The town of Santa Rita brings to mind images of delicious confections and pastries like sans rival and turrones de casuy—favorite pasalubong ideas for relatives and friends abroad. For all its reputation as the town that offers “sinfully sweet” indulgences, Sta. Rita is also a town noted for its devout spirituality, and, much like Betis, is known for producing a large number of religious priests and nuns.

The future town of Sta. Rita actually started as a clearing in a place called “Gasac”, which is now Barrio San Isidro. It was known early as Sta. Rita Baculud or Sta. Rita de Lele, in reference to its proximity to Bacolor, where townsfolk did their daily marketing via barrio Sta. Barbara. Its history is also closely linked with Porac for Sta. Rita was near the Esterillo Viejo, or Sapang Matua, a creek that originated from the Porac mountains. For a while, one priest—Fr. Pedro de San Nicolas—was assigned to serve the spiritual needs of both Porac and Sta. Rita. It was only in 1770 when Sta. Rita secured its political/spiritual independence from Porac, due largely to the efforts of Fr. Don Vicente Eustaquio Polina, a secular native priest. 1770, thus, is regarded as the town’s founding year, also coinciding with the assumption of office of Juan Balatbat, Sta. Rita’s 1st gobernadorcillo.

For its titular patroness, the town chose Santa Rita de Casia, a 15th century Augustinian saint invoked by desperate people beset with seemingly hopeless problems like troubled marriages and domestic violence. Sta. Rita was married to an ill-tempered husband who was subsequently murdered. Her two children vowed revenge, but Sta. Rita, through her intense prayers, averted her children’s criminal plot. The two fell sick and died before they could carry out their vengeance. Thus without a family, Rita joined the Augustinians but only after several unsuccessful attempts. She led a life of mortification and, in a moment of fervent prayer, received the stigmata of the Lord on her forehead.

The actual construction of the church was deferred until the late 19th century. An 1835 document asserts that a certain Don Alejandro Rodriguez, member of the town principalia, was accepted as a brother of the Augustinian Order for having been a benefactor of the church. It may be that Don Alejandro donated either land or money to initiate the building of the church.

Credit for the construction of the church of Sta. Rita as we know it today goes to the town prior, Fr. Francisco Royo who started the masonry in 1839. It was completed by Fr. Juan Merino in 1869 (one of the church’s 5 bells is inscribed with his name). Both priests were also responsible for opening roads linking Sta. Rita with Guagua and Porac.

The last Augustinian priest was Fr. Celestino Garcia who figured in the Revolution of 1898. At the height of the unrest, he was hidden by his loyal parishioners. Later, he was captured by Gen. Maximino Hizon in Bacolor. Taken prisoner, he was spirited away to Lepanto. He managed to elude his security however, and fled back south where the prominent Asingan family of Pangasinan gave him refuge. The 1st native priest was Fr. Braulio Pineda. Others who served the parish include Frs. Nicanor Banzali, Tomas Dimacali, Pablo Camilo and Genaro Sazon.

The original church measured 55 meters long by 13 meters wide. Its height was around 10 meters. The church has marked baroque influences as seen from its triangular windows, despite its solidity. Notable features include a large transept , a spacious portico and a short but squat 4-storey bell tower. Its pediment showcases a small retablo flanked by small bell towers. The Church of Sta. Rita is another fine example of the Catholic Church’s material heritage and any one who enters its portals will be glad to know that this pisamban and its walls still reverberate with the sweet memories of a proud Kapampangan town.
(16 August 2003)
Posted by Alex D.R. Castro at 4:16 PM

hi! thanks for this post. at last, a historical account of my lolo's hometown. hope you don't mind if i link your post to my blog.

thanks and keep on posting :)

Thanks for dropping by. Sta. Rita is in the center of a great Kapampangan renaissance in music and the performing arts. You should go visit more often!

Where did you get your research?
I am a descendant of the Pineda family of Father Braulio Pineda and would like to do more research on this town.
Thanks for your post and best, Paul Carlos

My main source for this is Fr. Jose Galende's book, "Angels in Stone" publihsed by Bookmark, the "History of Pampanga and its Towns" by Mariano Henson, and "Qng Tu;a Ra", a commemorative 1956 book about the Virgen de los Remedios, patroness of Pampanga.