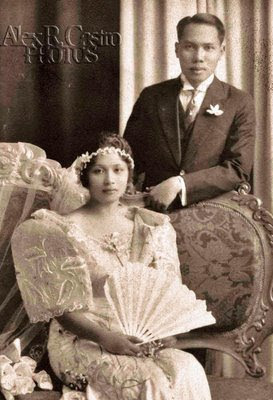 In 1931, two pedigreed Kapampangans, both born into wealth and power, tied the connubial knot and formed a union that, in the next years, would further cement their stature not just among the elite circle of Pampanga but also among the country’s social creme de la creme. After all, long before they met, Fernando Ocampo y Hizon and Lourdes Luciano y Magdangal were achievers in their own right, catching the nation’s fancy with their de buena familia backgrounds, talent, and in the case of Lourdes, her renown beauty.

Fernando Ocampo was the son of Basilio Ocampo and Leoncia Hizon, whose father, Anacleto, had been a former gobernadorcillo of San Fernando. He finished his Bachelor of Arts at the Ateneo in 1914, and after earning his Civil Engineering degree from the University of Sto. Tomas, he took up architecture from the University of Pennsylvania. His contemporaries included Juan Nakpil and Andres Luna de San Pedro (Juan Luna's son). He further pursued advanced studies at the American Academy in Rome, then joined the firm of Ballinger and Perrot in Philadelphia in 1922.
The next year though, he returned to the Philippines and was employed in the Architecture Division of the Bureau of Public Works. In partnership with Tomas Arguelles, Ocampo formed his own archictectural firm in 1928. In 1930, he founded the U.S.T. School of Fine Arts and Architecture and was a member of the Board Exams from 1929-1930. His contributions to Philippine architecture were honored with a Gold Medal of Merit from the Philippine Institute of Architects in 1953.
In his prime, Ocampo designed high profile projects that include the Arguelles Bldg., Sacred Heart Novitiate Bldg., Cu-Unjieng Bldg. , Paterno Building (later the FEATI University), and the Central Seminary of UST. His residential commissions included the homes of Benigno Aquino Sr., Admiral and Angela Apartments along Roxas Blvd. He also undertook the restorations of the Cathedral of San Fernando after it was destroyed by fire in 1939 and the war-damaged Manila Metropolitan Cathedral in the mid 1950s, under then Archbishop Rufino Santos.

On the other hand, Lourdes Luciano was one of three daughters of Jose Lazatin Luciano and Aurelia Magdangal of Talimundoc, Magalang., who were known for their legendary beauty (Rosario and Delfina were the other two). The Lucianos were the original founders of Magalang town, and it was here that Lourdes—or Unding--grew up.

While in La Concordia high school, Unding was handpicked by the local club, Mountainside, to join the search for Pampanga’s representative to the original Manila Carnival. By then, Lourdes’ famed beauty had already reached the organizers of the Carnival, and all indications pointed to a clear and easy victory in the national pageant. But a fellow Kapampangan—Socorro Henson—was also in the running. That time, the idea of having 2 Kapampangans in the winners’ circle either would not have seemed right, and so, Lourdes pulled out from the contest, a decision that hardly bothered her—for shortly after, she met and married Fernando.

The couple took residence in San Rafael, Manila, where they raised 4 children who were just as accomplished : Fernando Jr. (Pandot, also a noted architect and interior designer), Edgardo (+Hall of Famer, 4-time member of the Philippine Olympic basketball team), Oscar and Maria Pilar (Piluchi, now Mrs. Fernandez). Eventually, the family would move to M.H. Del Pilar in Ermita, before settling in Pasay.

Fernando Ocampo Sr. would leave his mark in history as the Father of Modern Philippine Architecture. Lourdes Luciano outlived her husband for over a decade and passed away on 13 June 2001.
(*NOTE: Feature titles with asterisks represent other writings of the author that appeared in other publications and are not included in the original book, "Views from the Pampang & Other Scenes")
Posted by Alex D.R. Castro at 4:35 PM

was just wondering when and how Arch. Ocampo sr. died?