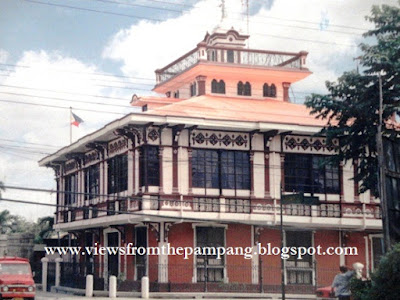 HERITAGE HOUSE. The Pamintuan Mansion once had Gen. Emilio Aguinaldo as its resident. It was here on 12 June 1899 that the first anniversary of Philippine independence was marked, with Pres. Aguinaldo, Del Pilar and other military heroes in attendance. Yearly, the city stages a re-enactment of that historic celebration.

One of the signature landmarks of the city of Angeles is a residential home, a house of memory and history that stands along Sto. Entierro Street, just 2 blocks away from the ancient Sto. Rosario Church, itself a revered structure with a many storied past. This is the Pamintuan House, built sometime in the 1890s by the patriarch, Don Mariano Pamintuan for his son Florentino Torres Pamintuan (1868-1925), who earned his fabulous fortune from his vast agricultural lands.

The biggest and most beautiful house in Angeles sits on  a prime location in the town’s residential district. Here, Don Florentino settled with wife Mancia Sandico Pamintuan (1865-1905) and his family of four children: Jose Ma., Mariano, Paz, Caridad and Natividad. Don Florentino would marry a second time after his wife’s death, to Tomasa Centeno, who would give him 11 more offesprings.)

One entered the mansion through a grand entresuelo, from where one climbed a massive stairway of solid Philippine hardwood. Upon reaching the landing, the opulence of the house becomes even more apparent: from its metal ceiling with distinct pukpok (repousse) floral designs to the ornamental arches, buttresses and calado (fretwork) transoms.

The mansion featured modern amenities; it had running water in the bathrooms and kitchen that was hand-pumped from a well and stored in a large water cistern atop another tower. Rooms were illuminated by liquid petrol lamps, lit by the male househelps nightly with the help of ladders. Later, chandeliers replaced these traditional lights with the coming of electricity to the town. The latest furniture pieces were ordered by the Don for the house. The baby’s room was furnished with wooden cribs and the walls lined with expensive ivory santos and other religious statuaries who kept watch over the children. Carved beds, dining tables and chairs filled the rooms, while the walls were adorned with family pictures kept in art nouveau frames.

Two separate spiral staircases led to a rooftop tower that doubled as a veranda, from where one could take in the fresh air and view the distant townscape. From there, once could descend down the backyard via a two-pronged staircase, leading one to the garden profuse with flowers and fruit-bearing trees. In the capacious garage were stored the carruajes (carriages) and the quilez, a square-shaped rig with seats on both sides, drawn by a horse.

The House of Pamintuan took on a significant role during the Philippine Revolution when Gen. Emilio Aguinaldo moved the seat of the new and fragile Philippine Republic from Nueva Ecija to Angeles in 1899, for purposes of military expediency. Gen. Antonio Luna reconnoitered the town and chose the Pamintuan House as headquarters for the First Philippine Army. Don Florentino, a member of the Revolutionary Committee, not only opened his house but also took in Aguinaldo, who took temporary refuge in the spacious and sturdy structure. His aide-de-camp, Manuel L. Quezon, on the other hand, stayed in the house of Angeleño, Don Lorenzo Sanchez.

On 12 June 1899, Emilio Aguinaldo, President of the new Philippine Republic celebrated the 1ts anniversary of Independence by staging a stirring celebration in the area. From one of the secondary windows, Aguinaldo watched a parade of gallant Filipino soldiers under the command of his youngest general, Gregorio del Pilar. Also present were Tomas Mascardo, Francisco Makabulos and the Luna brothers, Jose and Joaquin. In that momentous event, the Philippine tri-color was waved from the window of the Pamintuan house, certainly, a proud moment for the hundreds of Kapampangans who attended the rites—a first in Philippine history.

When Aguinaldo fled Angeles, the advancing Americans took over the place and the Pamnituan House was commandeered by Gen. Arthur McArthur for his headquarters in 1901. With Aguinaldo’s capture, a period of peace settled over the Islands and the Pamintuans returned to take up residence in their still-beautiful house. Here, they hosted socials and received visitors—including Frank Murphy, the Governor General of the Philippines in the 1930s.

World War II saw the Japanese invasion of Pampanga; Fort Stotsenburg was carpet-bombed and a regiment of the Japanese Cavalry occupied the imposing mansion. Upon Liberation, the house was rented to the USO, an organization that provided entertainment to American servicemen, and was converted into a clubhouse briefly, until 1947. The following year, the house was leased to a Chinese who transformed it into the Angeles Hotel.

In 1959, the prime property was sold to Pedro Tablante, but the family never resided in the mansion. Instead, the house was leased to the local government in 1964, becoming an annex of the city hall. When the Central Bank of the Philippines was looking for a suitable location for its regional cash and clearing unit, it considered the historic house as a possibility.

As luck would have it, the Angeles Historical Society (led by its president, Mr. Josel Suarez, Daniel Dizon, Josie Dizon, Bette Nepomuceno, Marc Nepomuceno, Gil Lim, Rosalie Suarez, Racquel Villavicencio and other members ), in conjunction with the National Historic Institute, was looking for a sponsor to preserve the place. The groups met with then Central Bank Governor Jaime Laya, and an agreement was reached with the Central Bank to acquire the property from the Tablante-Tungol family in 1981, with a provision for the buyer to preserve the house, even if it was meant for adaptive re-use.

Work began in 1993 and, on January 4, the Central Bank Regional Cash and Clearing Unit began its operations in the distinguished 19th century Pamintuan House, where patriotic Kapampangans once lived, heroes once walked and where a piece of history was created.
Posted by Alex D.R. Castro at 5:56 PM

Hi Alex , I was browsing through the history of the Pamintuan Mansion that you wrote and I wonder if
you could include who worked hard so that the Mansion would be turned over to the NHI. The Angeles City Historical and Cultural Committee's president, Josel Suarez recalls that it was on August 1, 1977 at one o’clock p.m. "exactly" the committee to preserve the house was born. If you take a look at the Facebook Page form Josel Suarez you will see the faded old photos when we met with then Central Bank Governor Jaime Laya. You can also look at the article by Visitacion de la Torre on the Pamintuan Mansion…thanks, Josie

The article has been expanded to credit those who worked behind the Pamintuan House-CB-NHI project. Salamat pu, Ma'am Josie.

Another Pampanga history I read today. Thank you so much for sharing! :)